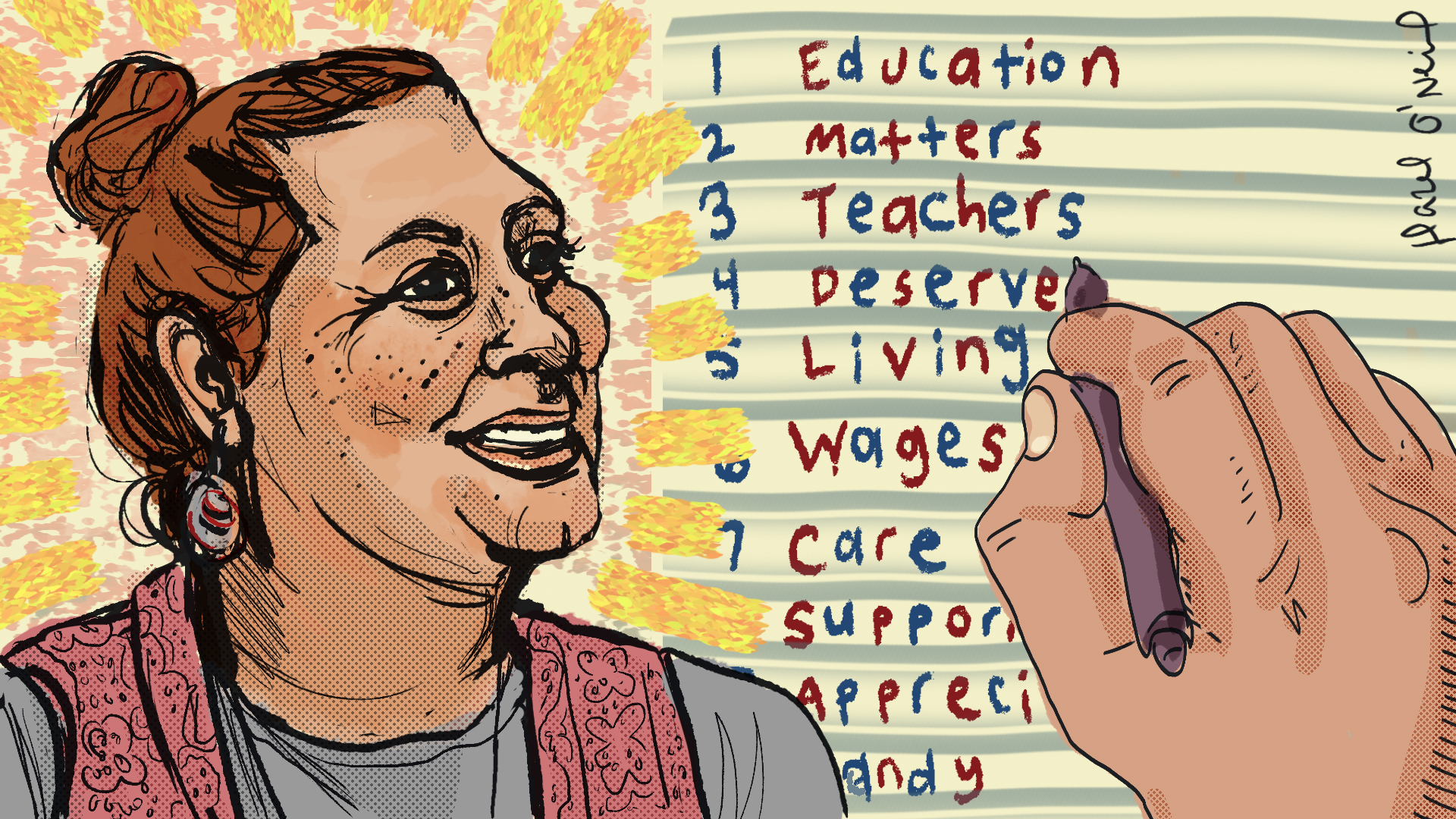 Andrea Brawdy is a special education teacher and a mother of five. She spent two weeks at the Capitol fighting for better teacher pay. The teachers made some progress, and she continues organizing among her colleagues on behalf of children, both those in her classroom and at home.

How one teacher is continuing the drive for change in Oklahoma

Getting this raise was no small feat. Even after teachers around the state demanded a substantial pay increase, they still left their classrooms to take part in a two-week long teacher walkout at the Capitol building in April. They wanted to bring attention to their demands: better pay, better benefits, and better treatment of teachers.

Mrs. Brawdy is using her new raise to retire her 17-year-old GMC Yukon.

“The gas gauge quit working, the paint was peeling, and I had a tape player. Call that retro or vintage,” Mrs. Brawdy said. “Because of the gains we’ve made, and the pay raise we have gotten, my husband and I were able to purchase a new 2017 Dodge Caravan minivan for our family, so we now have safe transportation for us and our kids.”

That transportation is crucial because she spends her nights traveling to the University of Central Oklahoma, pursuing a Master’s in Special Education, Mild-Moderate Disabilities. She has been working towards her degree for five years. She graduates in December.

However that hasn’t stopped her from being politically and civically involved.

“We still are fighting that fight behind the scenes with the elections coming up,” she said. One example: the teachers work together to cover each others’ classrooms during elections.

Not only is she concerned about education as a whole, but she’s also particularly passionate about the future of special education in the state.

Mrs. Brawdy said that she thinks special education teachers are “like unicorns, […] they are a rare breed,” especially in Oklahoma.

The average salary for an elementary school special education teacher in Oklahoma, like Mrs. Brawdy, is $41,820, according to the Bureau of Labor Statistics. That is nearly $20,000 less than the national average, as reported by BLS.

Mrs. Brawdy said the low pay provides no drive for educators to decide to stay in the state or move here,  when, on average, teachers in other states earn more.

This can be difficult for special needs students in particular because those students require specialized instruction and do better with a consistent routine. Mrs. Brawdy warns of these routines being destroyed altogether if there are not enough special education teachers in the classroom.

While the raises have provided hope within the state and for Mrs. Brawdy, she said she still thinks there’s work to be done.

With the current governor’s term coming to a close, teachers like Mrs. Brawdy are hoping to find a new candidate who is outspoken about improving the education system.

“We are hoping that our next governor will fight for us to have a better education system. To have more teachers and smaller classroom sizes,” Mrs. Brawdy said. “Continue to fight […] for teacher pay raises so we can […] be competitive against our neighboring states.”

Mrs. Brawdy, who said she has voted in past elections, feels that taking part in the walkouts have awakened something more in her, particularly when female lawyers joined the teachers at the walkouts.

“I am now more involved in our local union, our Association of Classroom Teachers. I have now become our building representative,” she said, “I go to the meetings and talk about what needs to be done, and what we have done, and what we do things differently, or better.”

Tuesday, when the teachers received their first paychecks including their raise, they celebrated with ice cream in the lounge, and Mrs. Brawdy had a gift for her colleagues.

She handed out “100 Grand” candy bars. Attached to these was a note, reading “Our raises may not be worth 100 Grand, but you sure are!” 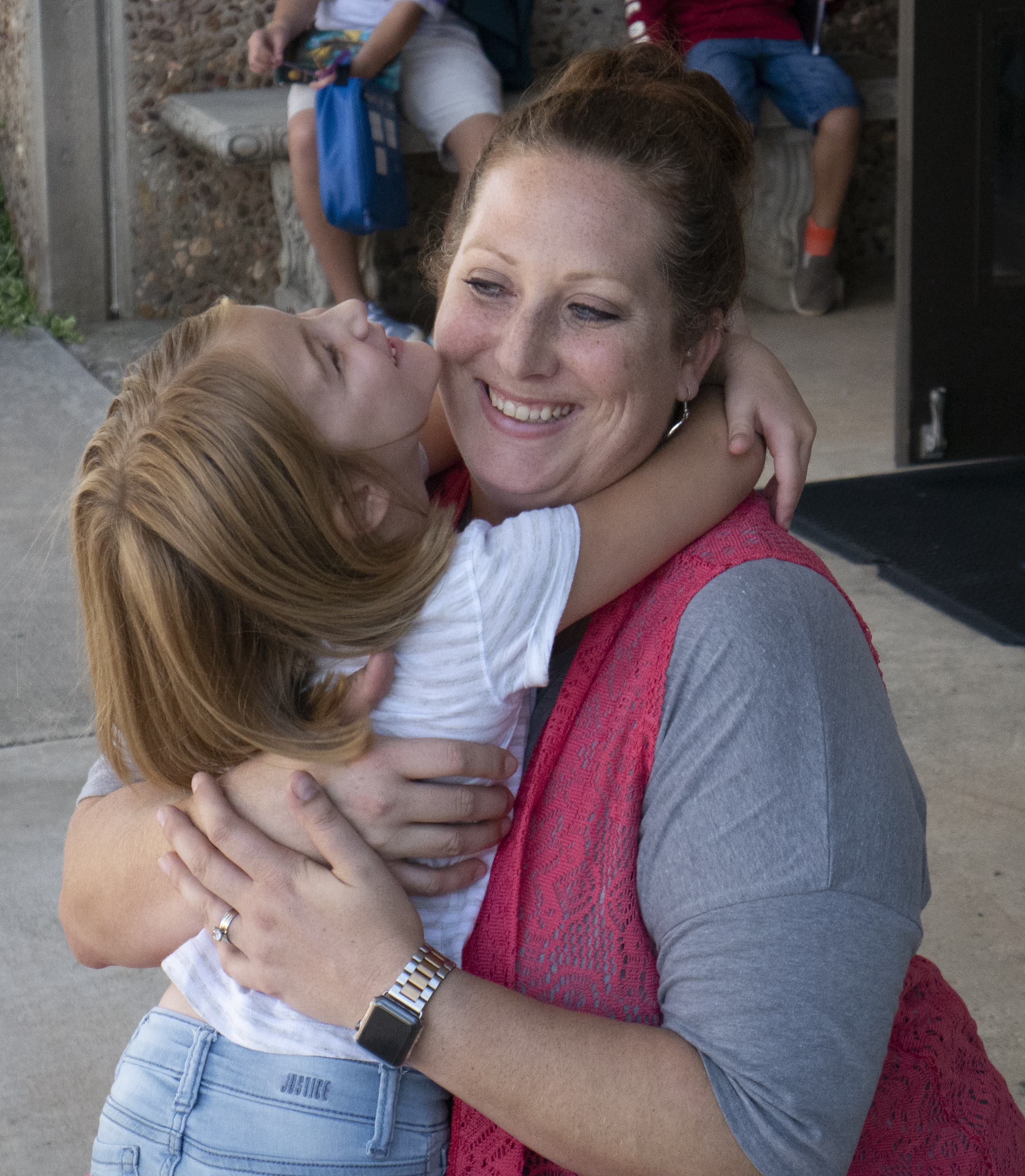 Mrs. Brawdy hugs her six-year-old daughter outside of the James Griffith Intermediate in Choctaw, Oklahoma at the end of the day. (Zach Goshorn/Next Generation Radio) 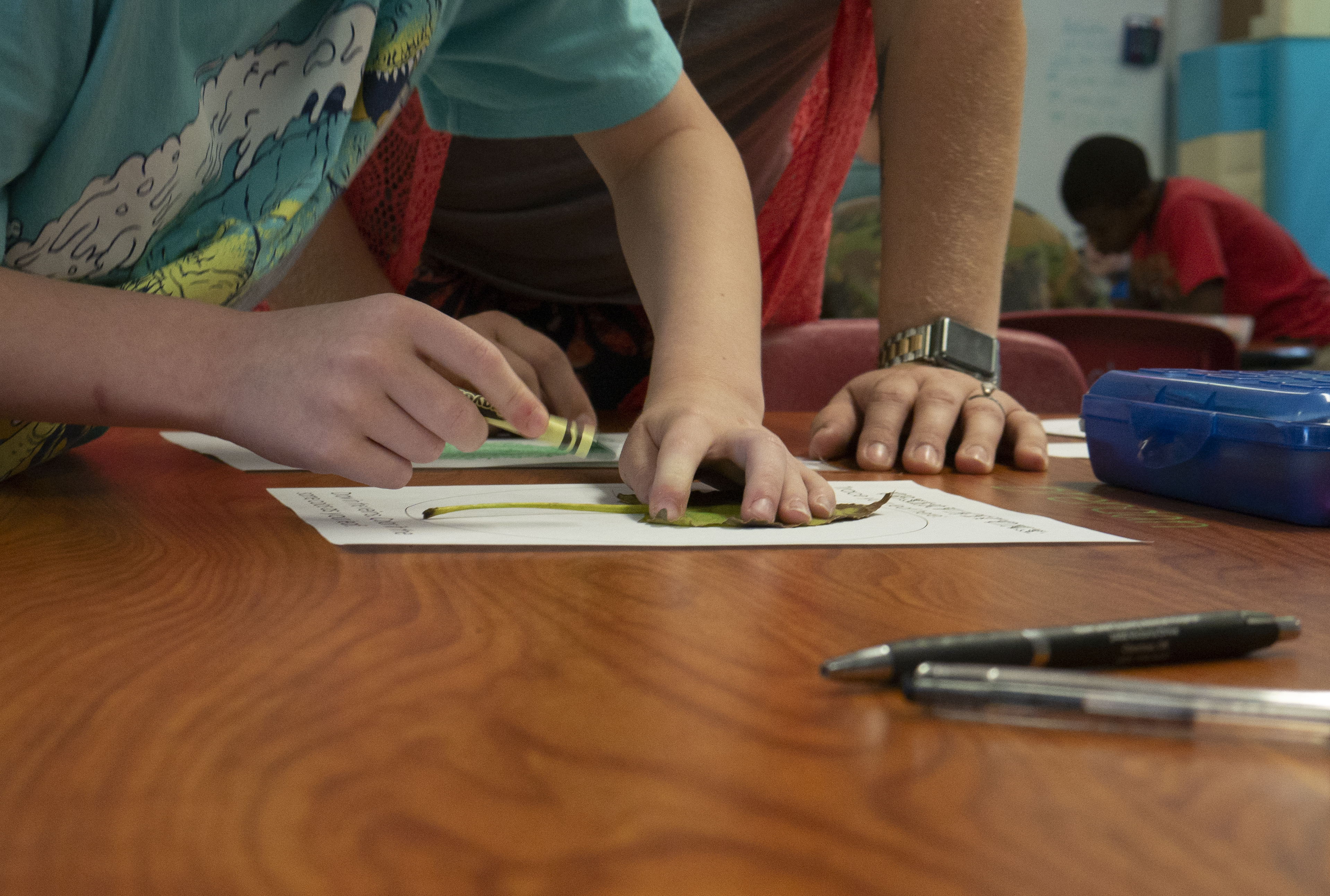 One of Mrs. Brawdy’s students works on an assignment as she stands by ready to assist. (Zach Goshorn/Next Generation Radio) 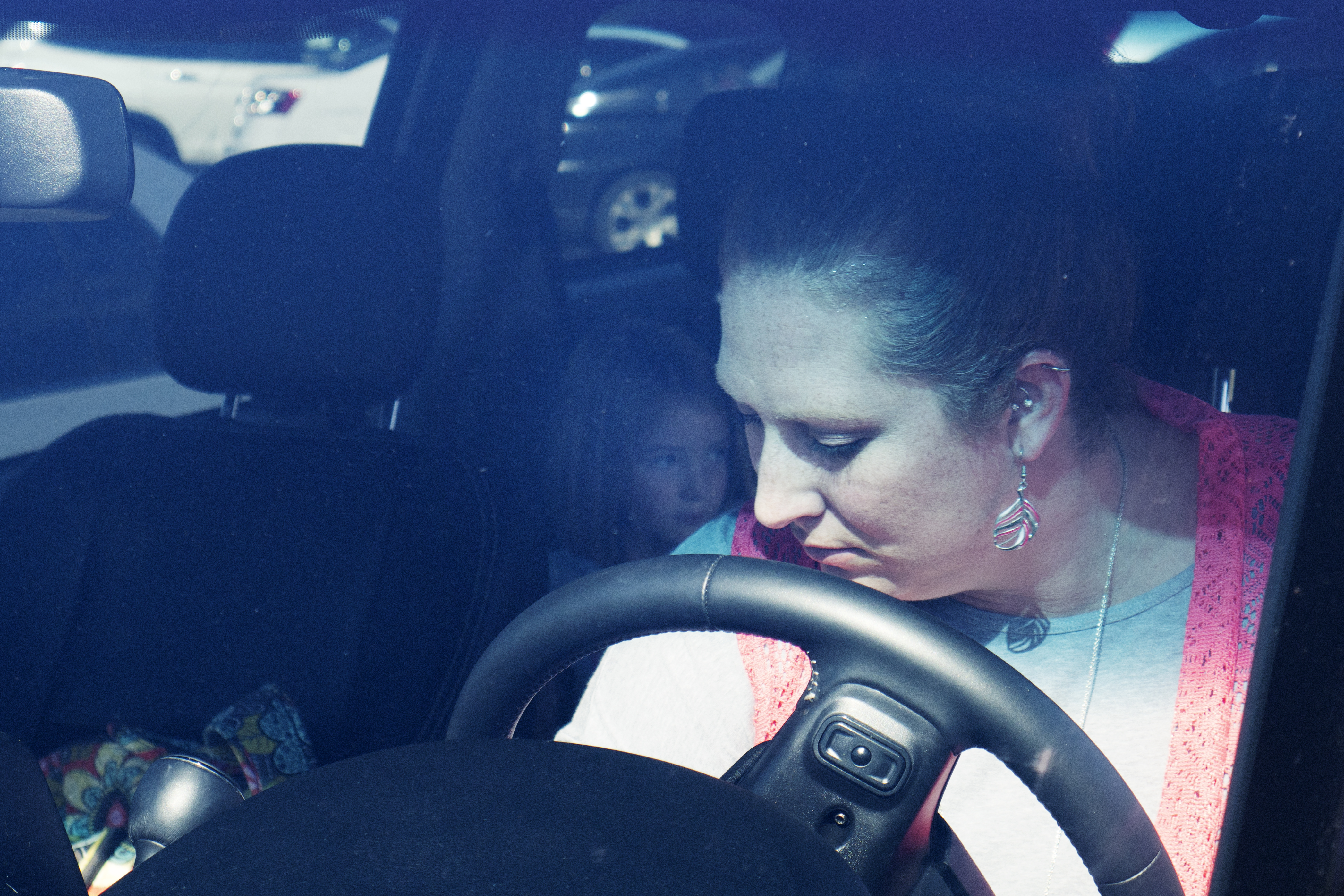 Mrs. Brawdy and her daughter prepare to leave school on Tuesday in her new Dodge Grand Caravan, which she was able to purchase due to the recent teacher raises. (Zach Goshorn/Next Generation Radio) 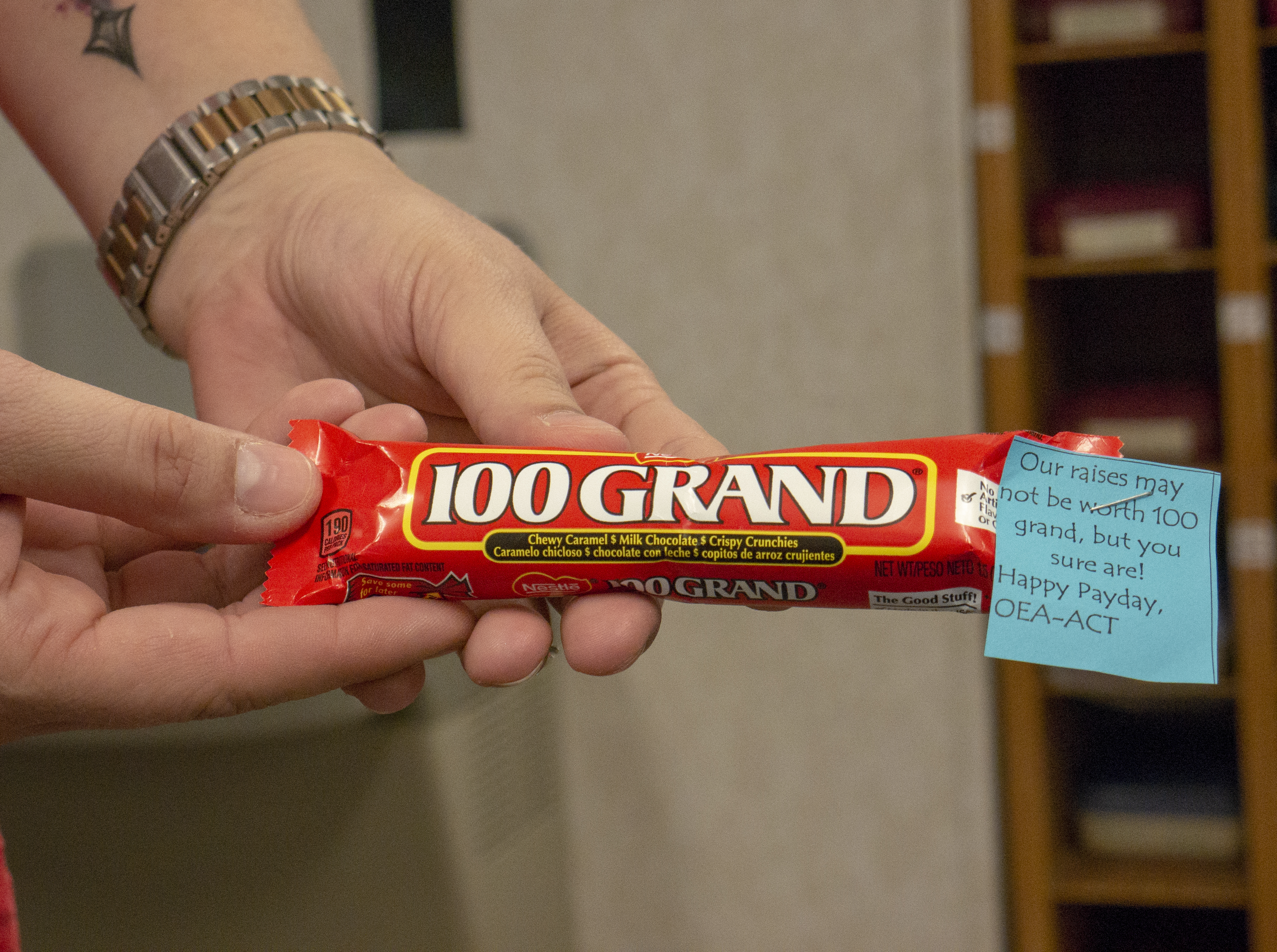 Mrs. Brawdy holds 100 Grand candy bar. She gave these out to her colleagues on the day of their first pay raise. (Zach Goshorn/Next Generation Radio)